Why I LOVE Britney Spears 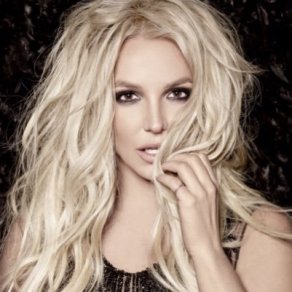 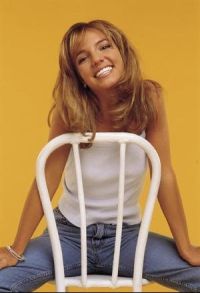 As many of you that know me, know that I absolutely love Britney Spears. However, it might seem odd that I am posting about this on my blog that is about educating on sexual violence. Well….I will explain. BUT I am going to have to go all the way back to fall of 1998.

I remember it was around 6:30AM one fall day, and I was just getting up to get ready for school. I had the TV in my room set so that when I needed to wake up it would turn on. As it turned on that morning, and I rolled over to see a music video was starting. And it was this one.

Baby one more time. For some reason I hit the record button on the remote, and it was saved forever on the VHS in my VCR(wow, what old school terms.) I fell in love with this song, and this video. I immediately had to go into school and tell all my friends about. And it started.

I began learning all the words, and the dance moves to “…Baby One More Time.” I bought the album when it came out in January of 1999. I hung the poster that came with it in my locker. So when the boys in my class saw I did that, they went and got their own posters and hung them in their lockers. But the boys had to take theirs down, while I got to keep mine up. I guess it was too young for 7th grade boys???? (Mind you, I went to a Catholic grade school.)

I learned the dance moves to “Sometimes,” and “Crazy.” I watched every MTV special. At the time this was going on I was in 7th and 8th grade. SOOO, that meant we had grade school dances. I went to our Catholic school dances, and performed the dance moves when the song came on. It got to the point, at one dance, I actually had a girl from another Catholic school come out in “School girl uniform” aka “…Baby one more time” video outfit to mock me.

I remember sitting on my living room floor patiently waiting for the above concert special to come one. Still using it to add moves to “Crazy.” But if your like me you know you can take the original version of “Crazy” and add those dance moves to “Crazy(the Stop Remix).

I took the “Crazy” choreography to dance competitions, I did them at birthday parties, I think I even did it on a ≥cruise at a talent competition they had.

The spring of 2000 came around. I was finishing up 8th grade and getting ready to move to the Catholic high school in the fall. May of 2000, the “Oops, I did it again” album came out.

I remember specifically, one of my friend’s mom went to the store and brought us copies of the cd at lunch. I brought my walkman just so I could listen to it. I remember I cried when I heard “Lucky” for the first time. This was because I wanted to be famous. I wanted to be a singer/dancer just like Britney Spears. Deep down, I knew I didn’t have the voice, but that’s what I wanted to do. I remember specifically a good friend from Kindergarten wrote in my 8th grade yearbook that she couldn’t wait to see my name in lights and I had her full support. I prayed and prayed that I could become a singer/dancer so I didn’t have to go to high school because I was scared. So that summer, my mom took me to studio and I recorded a demo. I sang “Baby, one more time.” I don’t think I did anything with that demo but I did it. I remember taking the cassette of it to my cousins and playing it for her. I was so excited!!!  That summer, I also got to see Britney Live on her “Oops, I did it again” tour.

So I ended up going to high school. And I still loved Britney. Although, things came up that took me away from that original love. I started having crushes, and dating. I got involved in a lot of school activities, like band and drama club. I still would watch all the award shows and TV specials. That never left.

I remember when she began to change her image from bubble gum pop to sex pot. 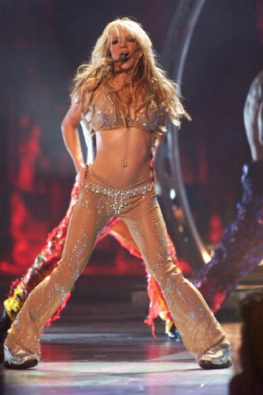 I still learned the moves, and was into the change, but she was everything like I thought in grade school. And the thought of being that singer/dancer began to drift further and further away. I was more concerned with my friends and boys. But I was pretty innocent when it came to boys. My personalty evolved in high school just did Britney, her image and her music. Another big factor that came into play for was bulimia. I really became insecure about my body and in 2002, I began a relationship with an eating disorder. This was another reason Britney faded into the background.

In late 2003, she came out with “In the Zone.” I was really digging this album and the summer after I graduated high school, I was suppose to see her in concert. She cancelled due to a knee injury. And shortly after that I started college.

Then I was raped.

I reverted back to Britney for help. She had different things going on. Like getting married to Keven Federline, and their reality show. She had a greatest hits album come out. And I found a friend at school that loved her just as much as I did. We went and bought the dvd with all her videos and watched them all. We even made a music video to her song “Do Something.”  I started to make videos of myself, of my friends, and even edited Britney spears videos to remixes.

I was hiding my feelings in this form of art. It really became therapeutic for me. Especially when I put myself in the videos. I was able to project an image of myself that I never really showed.

From 2004 to 2007 is a little hazy for me because Britney had a lot going on in her life. She had two little boys, and divorced Kevin Federline. And then things went down hill. During this time in my life, I had moved to a different college and got engaged. I thought I had it all together, and when I did, Britney didn’t. She was going through her own personal struggle while having it photographed and video taped. Every move she made was documented by the paparazzi. I had fear that this might end tragically. I continued to follow her, but not follow because the “hot topic” in the tabloids she had become but because I felt for her. It made me realize that we all are human, we all have faults, we all make mistakes. You truly cannot judge a book by it’s cover because no matter how the outside looks, you have no idea what someone has been through. I felt a connection in a sense that one I had this horrible thing happen to me, and then I went on somewhat of a downward spiral and could totally relate on that sense. I also realized that the dream I had when I was 12ish….there was no way I would every want to be a singer/dancer. Especially with the price that came with it. No personal space.

Even during her so called “breakdown,” she was still able to release music and came out with her album “Blackout.” I remember hearing the lead single from this album “Gimme More” and absolutely loved it. It was such a different sound for her. But with all of her personal struggles, promotion did not come with this album. Although she even released a second single from it called “Piece of Me.” Which truly summed up her life at the current moment.

This video was shot November 2007. A few months later she ended up being hospitalized and after she was released things began to look up.

All I remember from this time in her life, is I wanted to root for her. I wanted to be the fan that stood by her in her time of need. Her music was there in my time of need, and I still was going through that time when she released Blackout, so it helped.

The year of 2008, she began to turn things around.

She started to come back in the spotlight and realized a documentary called “For the Record.” The clip above is from it. And yes, I cried watching it. What she says in the clip is how felt especially right after being a victim. I let my guard down a lot and ended up getting hurt and taken advantage. This happened for quite a few years, but I wasn’t under the spotlight.

She released an album that year, “Circus,” and in 2009 embarked on her first tour since 2004….unless you count the brief stint when she toured the House of Blues under the code name “M & M’s.”

My best Friend, Julie, and I had plans to see her live when she came to Pittsburgh and I couldn’t wait. The first time since 2000!!! I remember I did not want to watch any of tour prior to going but I had to check out Piece of me being performed live for the first time.

The concept with the cage was amazing and fit the song perfectly. Of course I cried. LOL it was so exciting to see Britney turn her life a round in a positive direction. I knew I would be able to get there some day. At this point, I had finally kicked the eating disorder but still had days of depression and darkness.

During this time, I still worked on videos and I made an amazing 40 minute megamix of Britney music. Here is the first 10 minutes……but pretty much my favorite part, especially when “Overtime” and “Lucky” cross paths.

Lets skip ahead to 2011. Britney released her next album, “Femme Fatale,” and I was in heaven. This was the year, I truly learned to love myself, and Britney’s new music was perfect. She was going on tour that year, and I decided you know what, I am getting meet and greet packages. So Julie, and I planned an adventure. We were going to see her in DC and Philly. At Philly, we had backstage passes for a tour and to meet her. And at DC, we had backstage passes. What an amazing weekend. To see something come full circle. To meet the person that made the bubble gum music of my time of innocence and to have both of us go through something that no one should have to go,even though both were different. We even got to meet her personal assistant Fe. I knew who Fe was since 1998, she was the school teacher in the “Baby One more Time” video.

I know I don’t know Britney personally, but I have always felt a connection, and even though I have through a lot of things, there are still times I will have thoughts that my rape was my fault, and I try to think positively, and put some Britney music on because I know deep down the human spirit is resilient and Britney and I are proof of that.